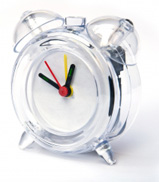 Delayed Sleep Phase Syndrome (commonly abbreviated to DSPS) is the most common of the circadian rhythm disorders. It occurs when your sleep pattern shifts later into the night, so you fall asleep later each night. People with delayed sleep phase syndrome often can’t fall asleep until the early hours of the morning and would happily sleep into the late morning or early afternoon if not woken up.

Delayed sleep phase syndrome often gets confused as a type of insomnia, but it’s a different type of condition. People have no problems sleeping when they finally do fall asleep, and the amount and quality of sleep is completely normal. The only problem is the timing of the sleep.

The late bed times can cause a severe lack of sleep if you need to wake up early in the morning, such as to go to work or to school. The lack of sleep causes a build of what’s called sleep debt. More and more sleep debt accumulates throughout the week, often paid off in full at the weekend with long lie in, which although refreshing often serves to extend the bed time further into the night. For this reason, delayed sleep phase syndrome may cause daytime sleepiness and all the detrimental effects of sleep deprivation.

There are five core reasons why someone might suffer from delayed sleep phase syndrome:

Being a natural night owl

People’s preferred time of sleep and wakefulness can be categorized into three areas:

This isn’t purely down to choice, people are actually biologically wired to be one of these three types, and which type you are changes as you age. You can take the Morningness Eveningness Questionnaire to find out your own type.

Light is one of the main cues used by your body clock to work out the time of day. Our bodies associate light with wakefulness and dark with sleepiness. When your body is in darkness, your body secretes a hormone called melatonin which makes you feel sleepy, but when your eyes see light, melatonin secretion stops.

Exposing yourself to bright light before bed, such as from a smartphone or TV, works to artificially extend your body’s perceived day, resulting in you staying up for longer.

To sleep, your body needs to wind down. However, late night meals, socializing, caffeine and energy drinks, or anything else that keeps you awake all have the effect of stimulating your body. Shifting these activities later into the night extends your circadian rhythm, again extending your body’s perception of a day.

Delayed sleep phase syndrome comes as a result of unconsciously extending the time you spend awake by gradually shifting your sleep pattern forward. Just by spending 15 minutes more time awake at night results in an almost two hour extension over a course of a week.

Spending more time awake each night can sometimes be caused by not making time for sleep, only going to sleep when you absolutely have to with no set bedtime.

Delayed sleep phase syndrome isn’t something you have to be stuck with. Over time, with good planning and a bit of persistence, you can gradually shift your sleep pattern back so you can fall asleep at a more ideal time. Here’s 6 steps you can take to achieve this:

Regulate your intake of light

Just becoming aware of the fact that light naturally keeps you awake is a huge step to take in overcoming delayed sleep phase syndrome.

Avoid bright light before you go to bed, particularly any backlit electronic devices. If the sun is up when you go to bed, ensure you have some good black out curtains to keep your bedroom as dark as possible. It may be helpful to buy some special blue blocking sunglasses if exposure to sunlight is impossible to avoid.

Similarly, expose yourself to as much light as possible when you wake up. If the sun is up, open the curtains as soon as you awaken. If it’s dark or cloudy outside, consider a form of light therapy. You could use a light box to use as you’re eating breakfast, or buy a special dawn simulator alarm clock, which gradually fills your room with light when it’s time to wake up.

I understand that caffeine and energy drinks might be all that’s keeping you awake during the day when suffering from a lack of sleep due to delayed sleep phase syndrome, but the fact is that they are often contribute to the problem of staying up too late.

The US army experimented giving its troops energy drinks to increase alertness during times when they were under attack and had no choice but to stay awake. However the research concluded that the energy drinks were in fact causing the troops to become even less alert by completely destroying their already fragile sleep schedule. They’re best avoided if you can possibly help it.

Delayed sleep phase syndrome sufferers are often teenagers who are undertaking exams, so this point is worth a mention. Night owls feel at their best late at night, so it makes sense that late at night would be the best time to study. In a night owl’s ideal world that would be absolutely right, but if you need to wake up early in the morning, it’s one of the worst things you can do.

Studying late at night stimulates the body and mind, preventing sleep. Even staying up before the exams for last minute studying has been shown by research to be less effective than not studying at all and getting some sleep instead. When it comes to getting the grades, sleep is more important than late night studying.

Late night snacks are often an everyday occurrence for the delayed sleep phase syndrome sufferer, but unfortunately they cause the problem to become even worse.

Additionally, your body can’t sleep when it’s busy digesting food. What’s worse is that your body can’t burn it off either, so it’s forced to store it as fat. To avoid this, eat your last meal no sooner than 3 hours before you intend to fall asleep.

Depending what time you’re going to bed and waking up, it might be quicker and easier to instead extend your bedtime by an hour or two each night, and work your way around the clock to your desired wake up time. This is probably the easier option for people with delayed sleep phase syndrome, but it does mean falling asleep and waking up at some very unsociable times.

Sleep hygiene is the technical term used to relate to your general day to day habits that affect sleep. The better your sleep hygiene, the easier it will be to fall asleep. We’ve mainly covered the timing of your sleep in this article, but there are also mindset and environmental factors that contribute to sleep hygiene. You’ll find many articles dedicated to each one of these on this website, but a good starting point is the How to Fall Asleep Fast article. Good sleep hygiene is simple easy to obtain, but it can make a huge difference towards your sleep.

I know exactly what it’s like to suffer from delayed sleep phase syndrome because I too suffered from it during my teenage years and early twenties. I know that at times it can seem to be completely unmanageable, but with the right know-how it can be overcome. Be patient, be persistent, and in time your sleep pattern will be under control.

How to Avoid and Overcome Jet lag
Circadian Rhythm Disorder