The Philips Wake Up Light HF3520 is the third and latest edition of Philips’ long line of wake up lights.

This alarm clock is a dawn simulator. Instead of being jolted out of your sleep by a jarring alarm this clock wakes you up naturally using light so you feel bright and alert in the morning.

The Science behind the Philips Wake Up Light 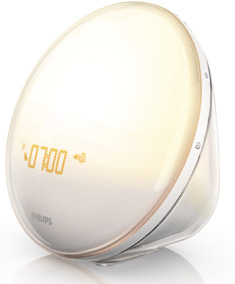 Going to bed just after turning the lights off and trying to wake up in the dark causes havoc to our body clock. It just isn’t natural. It gets confused, thinking that it’s still day just before bed and still night when you try to wake up. The result is that you’ll feel too alert to fall asleep at night and too sleepy to wake up in the morning.

Avoiding strong light in the evening is one way to allow your body to wind down for the night, but you’ll still feel sleepy in the morning if you wake up in darkness.

You could leave your curtains open to let the sun come through in the morning, but not everyone wants to wake up when the sun comes up. For most it’s too early, particularly in the summer months! And for others, they need to be up before the sun has risen. And who wants their wake up time to be governed by the timing of the rising sun in the 21st century?

The solution is to bring the light from the sun into your bedroom, and this is what the Philips Wake Up Light does.

The Philips Wake Up Light turns on between 20 to 40 minutes before you want to wake up (you can choose the time). It starts with a dim red glow, building up over time to a light orange, finishing with a bright white light.

Once the light is at its brightest at the end of the sunrise cycle, it plays one of five sounds:

Or you can choose to play your favorite radio station. The sounds gradually increase in volume until you wake up. To snooze, just touch anywhere on the device. The light is created from modern LEDs so despite the bright light, the device doesn’t get hot. It’s very energy efficient too.

You might be thinking that music such as ‘bird song’ would make an unsuitable alarm. You would be right if this was a traditional alarm clock where the alarm has the purpose of waking you up from sleep. But the purpose of these sounds isn’t to wake you up, but instead to alert you to the fact that it’s time to wake up.

The dawn simulation can be set between 20 to 40 minutes
It starts with a dim red glow and builds to a bright white light.

By the time the sound starts playing, you’ll either be awake or dozing in a very light stage of sleep. It’s not the sound that wakes you up, it’s the light. Exactly how nature has intended. And because your body has noticed the bedroom getting brighter for the past 20 to 40 minutes (even though you haven’t), it’s had time to stop the sleepiness chemical melatonin and prepare your body to wake up out of sleep.

The result is you feel naturally refreshed when the nature sound finally plays and ready to start your day.

The Philips Wake Up Light not only helps you wake up naturally, but also to fall asleep naturally. As I mentioned in the ‘science behind the wake up light’ section above, turning your light off and just expecting yourself to fall asleep doesn’t work.

Unless you’ve been avoiding strong light for some time, your body still thinks it’s day and will keep you awake until it finally realizes its night and sends you to sleep. By which time most people have their mind filled with thoughts or are stressing out about not being able to fall asleep.

The dusk simulator feature does the same as the dawn simulator but in reverse. Instead of waking up naturally, this feature helps you to fall asleep naturally.

You can set the sleep timer from 5 minutes all the way up to an hour. During this time the light will slowly begin to fade. Going from bright white, to orange, and finally to red as the light dims and slowly fades away. You can also choose to listen to one of the nature sounds or the radio.

It’s a wonderfully relaxing way to fall asleep. Your body becomes aware of the fading light and prepares your body for the deep sleep ahead. Much better than just turning off the lights and leaving your body clock to figure out what the heck happened to the sun!

Pros of the Philips Wake Up Light

Cons of the Philips Wake Up Light

A back to nature device that slowly and naturally prepares your body to wake you up without you even being aware of it. When you do finally wake up when the light is at its brightest, it’s with an invigorating sense of alertness. Waking up has never been so effortless.

A Review of 3 Bestselling Light Therapy Products on Amazon