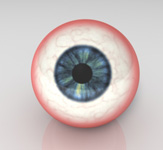 REM (rapid eye movement) is the second type of sleep we go into at night after NREM sleep. We first encounter REM around 90 minutes after falling asleep. The length of time we spend in REM becomes greater as the night progresses, so we get most of our REM sleep in the second half of the night.

REM sleep is the state where we experience dreams at their most vivid. People woken up from REM sleep often say that they had been dreaming.

It’s a common misconception that REM is the deepest stage of sleep. It’s actually a very light stage of sleep, so light that EEG graphs of people in REM still are very similar to ones of people who are awake. Although anyone in REM sleep undoubtedly knows that they have been sleeping, unlike the lightest stage of NREM sleep known as stage 1.

The amount of REM sleep is greatest in young children:

The purpose of REM sleep is a bit of a mystery. There’s no one reason for REM sleep that scientists can agree on, but it’s generally believed to have something to do with brain development, memory processing and learning.

The nature of REM sleep

REM sleep is often called paradoxical sleep because EEG graphs of the brainwaves show that the brain is very active, despite the appearance that you’re fast asleep. There are bursts of alpha and beta waves, just as if you’re awake. But unlike waking life, all this stimulation is being generated from the inside of your brain.

REM sleep is named after the rapid movement of the eyes that can be seen from under the eyelids. This movement sometimes corresponds to what’s happening in our dreams.

Both eyes move independently of one another, sometimes looking in slightly different directions. This gives us a clue that while sometimes we might be looking at things in dreams, this isn’t always the case.

People woken up from REM sleep almost always say that they were dreaming. Everyone has dreams, but most people forget them by the time they wake up.

The rapid eye movement is the only indication that there’s lots of activity in the brain because the body is perfectly still. In fact, the body is actually completely paralyzed in REM sleep. Only the eyes and the muscles needed for vital functions (such as breathing) are able to move.

This paralysis is known as sleep atonia. It’s believed that the body deliberately paralyzes itself to protect us from acting our dreams.

People who have a condition called REM sleep behavior disorder lack this paralysis and actually do act out their dreams. They can be seen running around the house from imaginary monsters and punching into the air. It’s not uncommon for these people to hurt themselves by running into stationary objects, or mistaking family members as their attacker.

Sometimes the paralysis works a little too well. We can become paralyzed before we’ve actually fallen asleep. More commonly, the paralysis can continue to last for a few minutes after we’ve woken up. It’s a sleep disorder called sleep paralysis. It’s completely normal although can be quite scary, especially if you’re not sure what’s happening to you.

Although it looks as though we’re fast asleep, not just the brain, but also the body becomes quite active.

And most strangely of all, we become sexually aroused. For men, the penis becomes erect, and for women the clitoris enlarges.

People in REM sleep are much easier to wake up than most stages of NREM sleep. We seem to have a certain awareness of our surroundings.

The Purpose of REM sleep

REM isn’t really sleep as we know it. It’s as if we’re wide awake, but only inside our bodies, shutting out the outside world completely.

The reason why we have REM sleep isn’t completely understood. People who have been deprived of REM sleep, either through an experiment or brain damage, don’t appear to suffer from any major health problems. Some anti depression medicine prevents REM sleep with no major side effects.

While scientists can’t yet fully agree on the purpose of REM sleep, these are the two theories that most scientists can agree on: