Sleep paralysis is a sleep disorder where the person experiences temporary paralysis either before falling asleep or just after waking up. The paralysis is often accompanied with vivid, very life-like hallucinations, combined with loud ringing or buzzing sounds. Many people report a strong sense that something evil is in the room with them, and feel that their breathing is being somehow restricted.

A surprising number of people experience sleep paralysis at least once in their lifetime. Despite the often terrifying experience, especially the first time when you don’t know what’s happening to you, sleep paralysis is completely harmless, at least in the physical sense.

Sleep paralysis occurs during that hazy state between wakefulness and sleep, either when falling asleep or waking up.

Below represents the timeline of a typical sleep paralysis episode:

Sleep paralysis episodes can last anywhere from a few seconds to five minutes or more. They’re not always as full blown as the episode above. Sometimes people become aware that they can’t move and experience a certain level of fear, but nothing more develops before it’s all over. 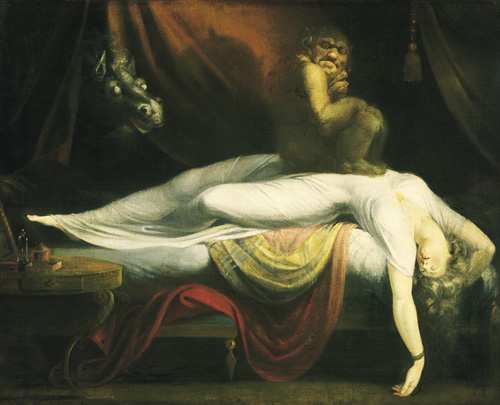 The Nightmare painted by Henry Fuseli in 1781
A visual representation of sleep paralysis?

Sleep paralysis can be absolutely terrifying. Those who experience them sometimes display signs of post traumatic stress disorder when recalling what happened, similar to that of war veterans. Not understanding what has happened, some people think they are going insane or that some supernatural phenomena has occurred.

The paralysis is caused by something called REM inertia. Sleep paralysis occurs during a stage of sleep called REM, and it’s in this stage that we experience dreams. The brain is very active during REM sleep, so much that REM sleep has often been branded as “paradoxical sleep” by scientists because brain scans of people in REM sleep are very similar to brain scans of people when they are awake. Whist we’re in REM sleep, we experience REM inertia which is essentially a type of self imposed paralysis which prevents us moving around and acting out our dreams in real life where we could hurt ourselves or others. Usually REM inertia kicks in just before we fall into REM sleep and disengages moments after, but sometimes it either activates too quickly when falling asleep or disengages too late when we’re awaking up, and this overlap of REM inertia into waking consciousness is what causes sleep paralysis.

There are some people who lack REM inertia, suffering from a condition called REM Sleep Disorder where they actually do act out their dreams. This isn’t the same as sleepwalking, which occurs during deep sleep rather than REM sleep.

Why we experience hallucinations during sleep paralysis is a question that has yet to be answered by dream scientists. One theory is that the mind produces these hallucinations in an attempt to provide a visual explanation for what’s happening. The reason why the hallucinations often involve objects in your room is because your eyes are actually open. Just like the muscles responsible for breathing, your eyes are unaffected by REM inertia. In fact your eyes are often very active when dreaming, which gives REM sleep its name, standing for rapid eye movement.

The following can increase your chance of experiencing sleep paralysis:

Sleep paralysis is usually entirely normal. There’s no medical need to prevent it unless the episodes are causing anxiety about falling asleep.

Often sleep paralysis can be avoided with good sleep hygiene, which includes:

For severe cases of sleep paralysis, doctors may prescribe an anti depressant (despite you not being depressed) which reduces both the amount and depth of REM sleep during the night, the type of sleep in which sleep paralysis occurs.

If you find you only get sleep paralysis whilst lying in bed in a certain position, avoiding that sleeping position can entirely prevent episodes from occurring.

When you’re experiencing sleep paralysis, making small movements with your fingers, mouth, or even rolling your eyes may just be enough to break out of it. Some people find it easier to try and fall back to sleep, knowing that they’ll probably be fine next time they awake up.

Some people even enjoy sleep paralysis. Rather than experiencing fear, they feel a sense of wonder and intrigue. Some are able to control the hallucinations, flying around their room, out the window and down their street, just like they would in a lucid dream.

An important part of treating sleep paralysis is understanding the condition itself. Despite all appearances, it’s not something paranormal. You’re not being haunted or abducted by aliens, and you’re certainly not going insane. Simply parts of your body are coming out of sleep a little faster than other parts. The first episode is often the scariest, but many people feel fine once they know exactly what’s happening and that no physical harm can come to them.