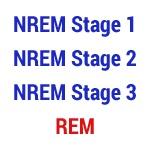 The four stages of sleep

In this article I will explain the differences between each type and stage of sleep and where they appear in your sleep cycle.

Understanding these different varieties of sleep and where they appear in your sleep cycle can help you get the very most out of your sleep and even tweak it a bit to maximize its effects.

NREM sleep is the first type of sleep you enter into when you first fall asleep. Most of our time asleep is spent here, making up for 75% of an adult’s sleep.

NREM is split into 3 stages, with each stage taking you deeper and deeper into sleep.

This is the first stage of NREM, starting from the moment you slowly drift off to sleep. Your brain begins preparing you for the deep sleep ahead. Your muscles relax and your breathing becomes slow and steady.

It’s a very light sleep. If you wake up at this stage, you might not even know that you had just been sleeping. People who stay in this stage of sleep for long periods often claim they spent much less time sleep than they have. Although they would certainly feel like they slept much less if they missed out on deep sleep.

At this stage you might experience what’s called sleep starts or hypnic jerks. This is a strange sensation that feels like you’re falling as if you’ve just tripped over something. It’s completely normal and just a sign that your body is slowly shutting down and sleep will soon be upon you.

Stage 2 is the next stage of sleep following on from stage 1. Here you’re in a deeper sleep than in stage 1. You can still be woken up pretty easily at this stage but you will certainly know that you had just been sleeping.

Here your body functions slow down even more. Your brainwaves become longer and slower as your body prepares for the next stage of sleep.

Stage 3, also known as slow wave sleep is the last stage of sleep. Here your body is in a deep sleep. Waking someone from this stage would be pretty difficult and if you managed it, they would feel very groggy, tired and disoriented. They certainly wouldn’t thank you for it!

Brainwaves are now at their longest and slowest. Your body functions slow down to their minimum. This is where sleep is at its best, deeply nourishing and refreshing.

Dreams are more common in this stage than other stages of NREM sleep, although you would only remember fragments of your dreams, if anything at all.

REM sleep is the second type of sleep, often kicking in only after a full cycle of NREM sleep.

This is the stage where most dreaming occurs. REM is sometimes called paradoxical sleep because brain scans of people who are in REM show that their brains are very active, despite the fact they’re fast asleep.

However, while your brain is active, only your eyes can move. There are exceptions though.  Some people have a condition called REM Disorder where by their body is not paralysed during sleep and they can actually act out their dreams.

From the age of 2 onwards, you spend around 25% of our sleep in REM. Newborns spent around half of their time asleep in REM.

Why do we have two types of sleep?

It’s not really known why we have two types of sleep. Logically, it’s easy to think we should only need the nourishing deep sleep NREM provides us.

The purpose of REM sleep is not fully understood. Some scientists think REM sleep may have something to do with the role of acting on our memories and making sense of the day, which could explain why newborns have more REM sleep than others as they explore their new world.

However people who have been scientifically deprived of REM sleep show no change to their memory or any aspect of their lives, so for the time being it remains a bit of a mystery.

The Stages of Sleep in your Sleep Cycle

Our body’s cycle between REM and the stages of NREM several times during the night. Here’s an average sleep cycle: 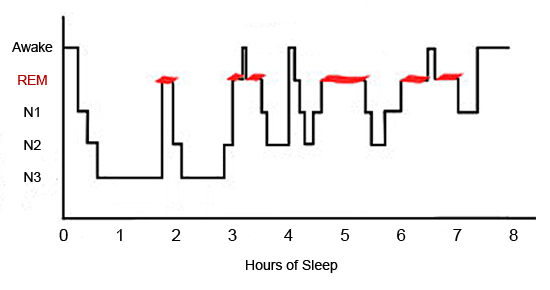 Once you first fall asleep, you do a full stage of NREM, before arriving at your first dose of REM sleep.

It’s natural to wake up a few times in the night after the REM stage. Most of the time you won’t even remember waking up at all.

Being aware of your own sleep cycle can help you effectively plan your sleep schedule. For example, it would be a bad idea to schedule in an hour nap, since you’re most likely to be woken by your alarm clock in NREM stage 3 where you would no doubt feel much worse than before the nap. A better time for a nap would be around 20 minutes to make sure you don’t go beyond NREM stage 1 or a little over an hour so that you awake during REM after a complete cycle.

Deep sleep is where you receive the nourishing refreshment sleep provides. But as you can see, it only happens during the first part of the night. So as it stands, a regular sleep pattern is a little inefficient. But if you were to somehow experience more deep sleep, then you can forego the majority of time spent in the weaker stages of sleep. How can we do that? Well it’s not easy, but the answer lies in altering your sleep pattern.